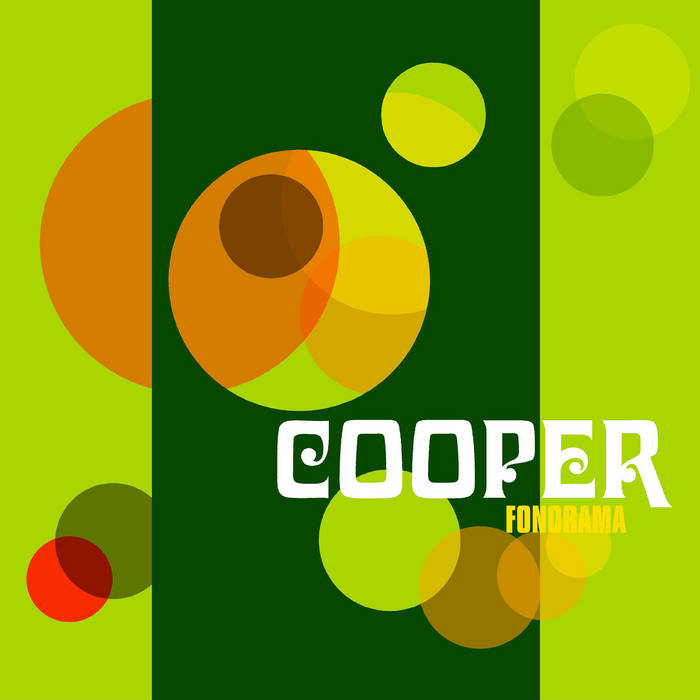 COOPER is Alejandro Díez’s new solo project. Alejandro is already part of the history of the best Spanish pop, thanks to his prior band LOS FLECHAZOS. They were the most important mod band in Spain, and they also managed to get outside Spain and play live gigs abroad, or even have their albums released in countries like Japan or Germany. Besides, in Spain their records sold specially well, reaching an audience much wider than the “mod” tag they were supposed to be exclusively destined. This was managed thanks to songs like “La chica de Mel”, “Cansado”, “Viviendo en la era pop” or “A toda velocidad” -just to mention some of their hits- which were so immediate and catchy that would infatuate anyone. And that is what happened.

After more than a decade of tireless activity, tours and albums, LOS FLECHAZOS opted for finishing their career in 1998, to be more precise during the self-organized “Purple Weekend” mod festival. Elefant Records released the band’s last two albums (“Alta fidelidad” and “Días grises”) and now proudly presents COOPER’s first album.

Alejandro comes back with reinforced energies and a handful of excellent new songs that pretend to MARK A DIFFERENCE with his previous work. Though COOPER’s sound and songs are still strongly rooted in the best sixties pop tradition, COOPER is not LOS FLECHAZOS part II. It’s not even a proper band, only the way that enables Alejandro to express himself artistically, in a very unique and unmistakable way. COOPER is Alejandro, but Alejandro was not alone in the studio. He was helped by friends like Carlos Torero (owner of Rock Soul studios, where great part of this album was recorded) on drums, Mc Cartney (ex SEX MUSEUM) on bass and Mario Alvarez (POPELS) on guitar.

Introductions being made, nobody should expect a too forced stylistic turn. Any FLECHAZOS fan would recognize the one that hides behind any track in “Fonorama”, as the vocal style and the composing skills of Alejandro are completely unique. What happens is that, free from the stylistic constraints (self)imposed by LOS FLECHAZOS, this time Alejandro has had the opportunity of trying new ways of ornamenting his songs: string arrangements (“Es tarde”) or even a sampler (“El rascacielos”).

Guitars are much tougher here, close to the current brit-pop acts which Alejandro appreciates so much; besides, one of the key elements in the sound of LOS FLECHAZOS -Elena’s cool Hammond organ- is notably absent throughout the whole album. To cut a long story short, COOPER is not LOS FLECHAZOS, but COOPER is one hundred per cent Alejandro.

His lyrics in Spanish has always been very personal, and they also show a change has come. In LOS FLECHAZOS we had multiple references to mod culture and odes to youth dancing wild to the sounds of raunchy soul and rhythm and blues; here the general tone is much mature and quiet, describing vividly how dreams can collide with reality: “I’d really wish to see the streets on fire again, while the earth shakes under my feet. I still feel that electricity but winters are growing tougher and tougher” (“Diciembre”).
“Reality turned up and I didn’t realise; it wants to convince me that it has always been here, even while I was losing my mind” (“En el parque”).

Though there are some ravishing vitalist moments, like a perfect description of how exciting can be to turn on the radio’s dial and discover new sounds: “A thousand electric discharges sparking in your radio, flooding the city with technicolor sounds... A song’s flying across the airwaves and nothing can be better” (“Tecnicolor”)

There’s also room for some displays of a sensitiveness enough to describe and set to music the most delicate feelings, without sounding too soapy: “I could gulp the whole ocean just to see you beside me. I would destroy your coral cell for just one of your thousand salt kisses” (“Imposible”)

“Fonorama” is a new chapter in the evolution of one of Spanish finest pop writers and performers, one that many people had started to give for lost due to a too long hiatus. But COOPER, aka Alejandro, is back for good, as inspired and brilliant as usual.