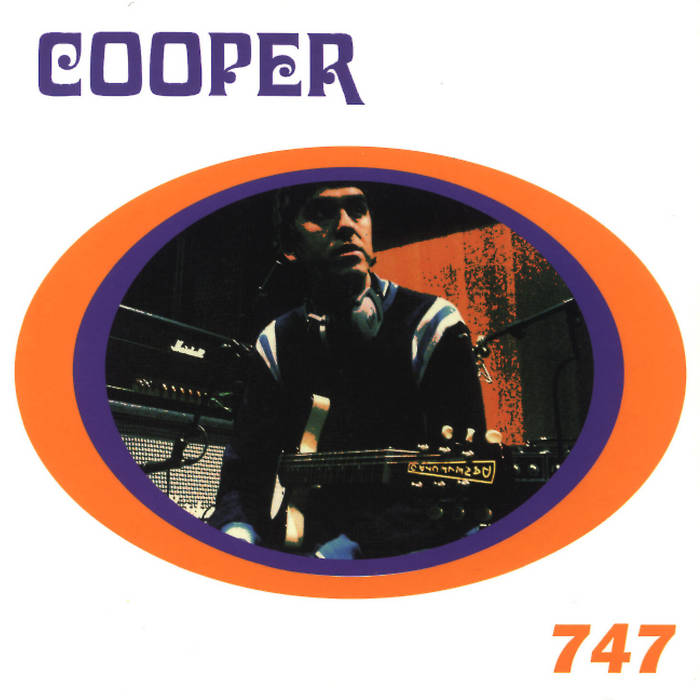 For more than a decade Alejandro Díez led Spanish number one mod band LOS FLECHAZOS. COOPER is Alejandro’s new project: his first album Fonorama appears on November 2000 in Elefant; the album is presented in a lengthy Spanish tour, including appearances in most Spanish summer festivals: FIB (playing the main stage in front of more than 20.000 people), Contempopranea, Socarrat, Do Norte and Sonorama, to name only a few.

After a hiatus that was starting to be too long, COOPER is back with reloaded energies and excellent songs, as inspired and brilliant as usual.

On May 2003 747 is released. This new single means a new stage in the sound adventures of one of our best pop writers and performers; Alejandro has decided not to release an album again; 747 is the first of a series of singles which will be out during the following months. From now on, we’ll enjoy his splendid songs in small pills.

10 REASONS NOT TO MAKE AN ALBUM AGAIN
1.- I’ve been a seven inch singles and CD-Singles collector for ages. To me, that’s the perfect pop format, the most direct and sincere one. Pop is not jazz, nor classical music. Pop means beautiful songs that can make our life happier or shrink our hearts. I belong to the 45 club and its 3 minutes of magic.

2.- As a composer, I’ve always written single songs, treating them as something that could work by itself as the A-side of a single, a small treat in a flexi-disc or a hidden track in a compilation. As I defend short movies instead of full-length movies, or short tales instead of novels, I have never accepted that they were "a minor entertainment" or a simple creative output for new artists.

3.- I find the album a completely old-fashioned concept, slightly hippie and something very far from people’s needs. The album is obsolete and square, plus the biggest lie of an industry that has managed to sell LP’s to the audience for a long time, whereas a great share of the purchasers (dj’s, clubs, kids with little money to spend) only asked for "the song". The trick is not working anymore: now they download just the song they want and that’s it.

4.- Things have changed a lot in the last 20 years: paradoxically, today the album not only promotes but also symbolizes something I detest: music being listened to superficially. When I bought Nacha Buena Disposición, I didn’t stop listening to it for a month and a half. Why? Besides truly loving it, I didn’t have money to buy another record so I squeezed it till I learnt it by heart. Today nobody has time to do so, most of us have a big pile of unlistened CDs at home. There’s so much information and fortunately the access to music is so simple that we search for and select our favourite songs without giving second chances. There’s nothing as frustrating for an artist as to know people listen to your album once, double-cross their favourite and then they won’t listen to the rest of the songs again, songs which the artist has emptied his soul in. A single is easier to listen to, that’s why you listen more to it.

5.- All this stuff has grown an enormous laziness inside me, that prevents me from starting to look for a producer and work in the pre-production of 12/14 tracks, locked up in a studio for more than a month... What a bore!! I’m making music to have fun.

6.- CD-Single is perfect in its inmediacy: you’ve got a good idea, write a song and two months later it’s in the shops. It’s far more spontaneous, and doesn’t leave you time to think a thousand times if you are doing right or wrong. We played YO SE LO QUE TE PASA on FIB 2001, and I don’t want that to happen again.

7.- To release singles exclusively can be the ideal method to fight against the tyranny of the "new thing" that dominates the media, specially the airwaves. An album as an average life of a month and a half; then it doesn’t get played again as there are so many new records to play. Usually each Dj chooses his fave song of the album and doesn’t play any other, so the complete tracklist passes quite unattentioned by the listeners. It’s even easier to listen to a non-album single B-side (what it was wisely known as "outtake"); any special acoustic live take recorded on tape has more chances even! So, if you release a new single every three months you may have more possibilities of having your songs listened, and at the same time you can fight against the "newest thing" dictatorship.

8.- CD-singles are poor sellers, their distribution is very complicated, they can damage the author’s credibility and besides they are a real nightmare for the company’s promotion department, who finds all the doors closed. Well... we are talkin’ about being indie, ain’t we? To be anti-industry means you don’t give a damn if you sell 1.000 or 100.000 copies, provided your music is handled with care. And Elefant compromises to make a video-clip of every new release, shouldn’t I be happy?

9.- Another (slightly more selfish) not to want to release albums: that’s how I avoid having to answer the SEMPITERNA question: "What’s the difference between this second album from the first one?". If I also managed not to get asked about the reasons for splitting up Los Flechazos, that would be heaven.

10.- The last reason: by releasing singles only, you have more possibilites to experiment with more "radical" ideas in the sound, the sleeve designs, the photo sessions... the evolution of the band and its sound gets documented in a much better way; in the sixties the artists were constantly in the eye of the hurricane, with everyday photo sessions, gigs, interviews and tv appearances... I guess here my mod "narcissism" gets out to the surface.

Releasing albums had turned into a very frustrating routine: if you make an album you’ll always try to make it perfect, whereas releasing singles in a regular way you can sit and see how your music "breathes" and growns up, while you adapt your pace to it.

I’ve also believed that pop, though it feeds my soul, was a minor art. And me, a minor among minors.